Welcome to the second installment of the story about my Land Rover Defender Project, if you haven’t seen the first part, click here to read part 1. In this post I will talk about the first modifications I did to my Defender, and share with you the good and the bad….

Out With The Plywood and In With The Dogs

As I mentioned in the Introduction post, I had two dogs at the time, and they were one of the main factors behind getting a 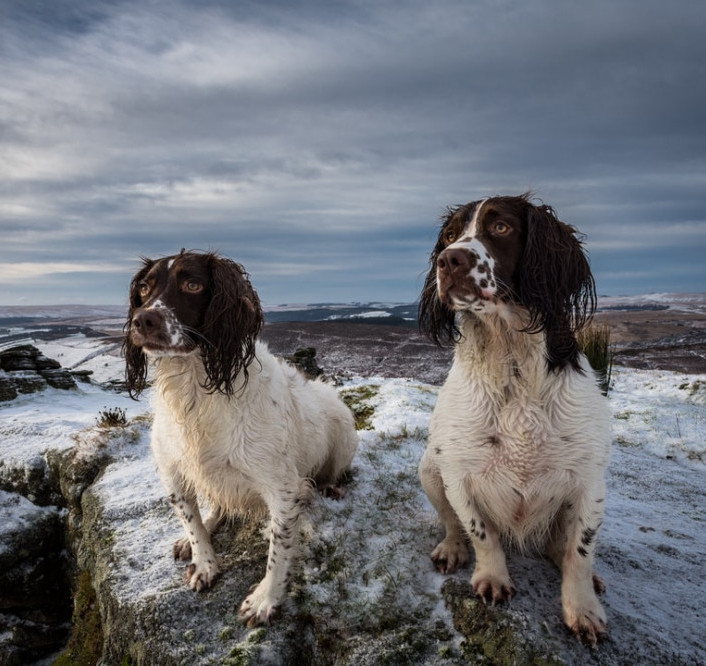 vehicle such as a 4×4. There’s just something about dogs in a Land Rover. Maybe it’s a British thing, but it just seems so right to have a couple of energetic fur balls slobbering all over the place in the back of a Defender. However, my Defender at the time of purchase was full of plywood shelving, I presume for the builder who owned it before me to keep his tools in. Obviously he didn’t have any dogs to keep in there. So first job for

me was to rip all that out and install a dog guard. The last thing you want when you’re hammering on the anchors is a slobbery spaniel hitting you in the back of the head. Luckily for me, my boss of the time had a genuine Land Rover dog guard for a Defender. He donated to a good cause, being a dog lover himself. I actually still have it to this day, and I intend to use it again one day too. Once the plywood, and the plethora of brackets and fixings with it, were removed, in went the dog guard, and off we went for a test drive.

It almost goes without saying, really, but if you’ve got a 4×4 then you have to fit loads of lights all over the place. The brighter and more obnoxious the better, generally. To this end, then, I followed suit. Here you can see a picture of the many lights I had on the front, the roof bar has been placed on the bonnet so I could fit it in the garage. Obviously, I had a couple of work lights on the back too! 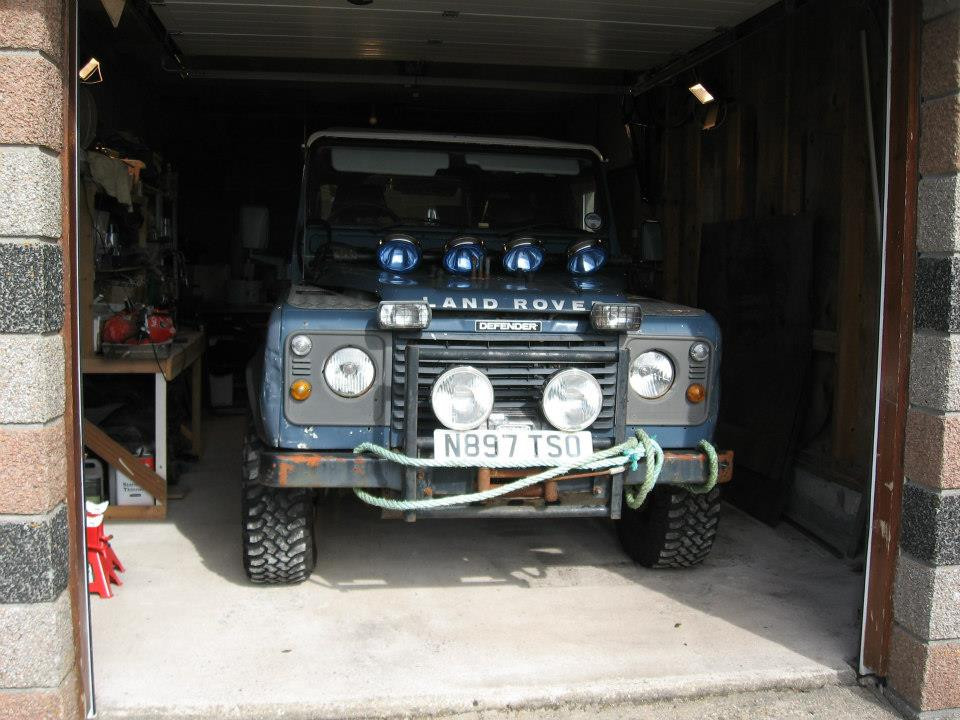 After this, came some new tyres. Well, actually, after getting stuck on what could only be described as a particularly determined blade of grass, and being duly mocked by my now Land Rover friend (the one whose Defender I nearly bought in part 1), I decided to get some new boots. I had a good look around at what was available at the time, I wanted something that would have decent road manners, yet be good off-road too. Goodyear Wrangler, Cooper Discoverer, and BF Goodrich Mud Terrains, were the top three. Much like my path to settling on a Defender, the road to deciding which tyres to buy involved me instictively picking one, checking every other possible option, and then ending up right back where I started. I don’t know why I do it to myself. But I’m glad I went for the BFGs in the end, in fact I still have them to this day too! If you’d like me to do a review on them let me know in the comments section below.

All The Bits You Can’t See

After making it look good, and neglecting the mechanical things, inevitably the day came when it started making a funny noise. I noticed that on right-hand corners I was getting a slightly alarming “clanking” noise. As I worked in a garage, as a storeman, I could use the workshop out of hours. Up on the lift it went, and within a few minutes I diagnosed the problem as a worn prop-shaft universal joint. Now, being the storeman, and knowing I was getting a Land Rover, I had been sure to keep a good stock of good quality Land Rover parts. Wipac indicator and side light lenses, those little annoying clips for the doors, and some GKN universal joints. An hour or so later I had it repaired, and the scenic route home confirmed it was a success.

You know it’s a funny thing, for all the stick people give Land Rovers, I never had nearly as many issues as they complain about. I made sure to give the whole vehicle a good service, using genuine Land Rover filters, and good quality oils and fluids. I did have a swivel ball seal start to leak, but I had been frequently driving in muddy, gritty conditions and probably not cleaning it all off as well as I should have. Self inflicted I’d say. I spent a few hours in the garage replace the parts, along with a new wheel bearing while I was at it. Other repairs, were again self-inflicted, such as the bent steering rod. I replaced the standard items with some heavy-duty ones from Paddock Spares.

That was that really, maybe I just got lucky, or maybe the fact that I was willing to put the time and graft into maintenance meant that I didn’t have all these horror break downs that so many Landy haters go on about.

How Come It’s Not Still On The Road Then?

Well, I’m glad you asked. The Achilles heel of the Land Rover is their tendency to rust, a lot. Again, there is a small amount 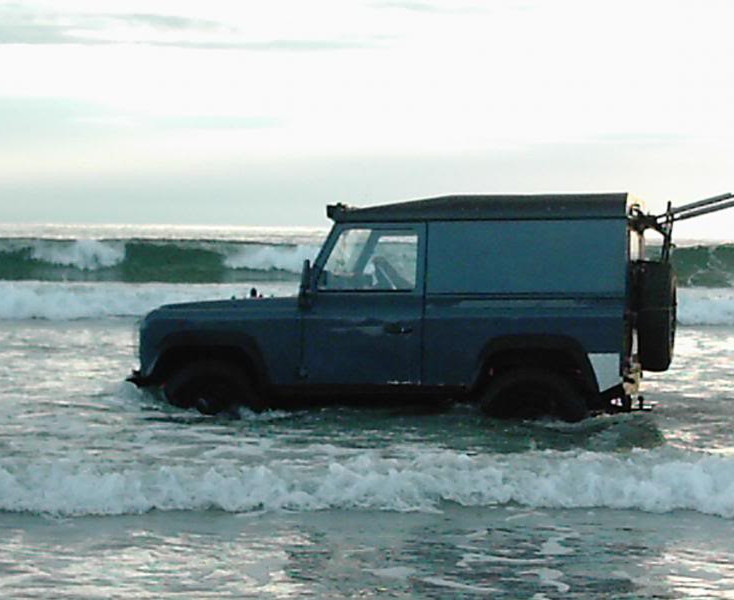 of self infliction here…. I may have driven it in the sea a bit. And then not done a very good job of cleaning it all off again, again. As the picture shows you, it did rather accelerate the rusting process.

Famous words once uttered by everyone’s favorite mountain bike riding sheep, let me know in the comments if you know who I mean, “this is why”. This is why I have to rebuild my Land Rover. Well no, let me rephrase that because my Dad is probably reading this, I have to rebuild it because I took it all apart. I had to take it all apart because of the horrendous state the chassis ended up in… because I’d driven it in the sea. So, after being a silly boy then, I now need to pay for my stupidity by putting it right. And this is where the real journey begins…..

If you’ve found my ramblings entertaining in some way, perhaps you’d like to donate a couple of quid towards the project, it 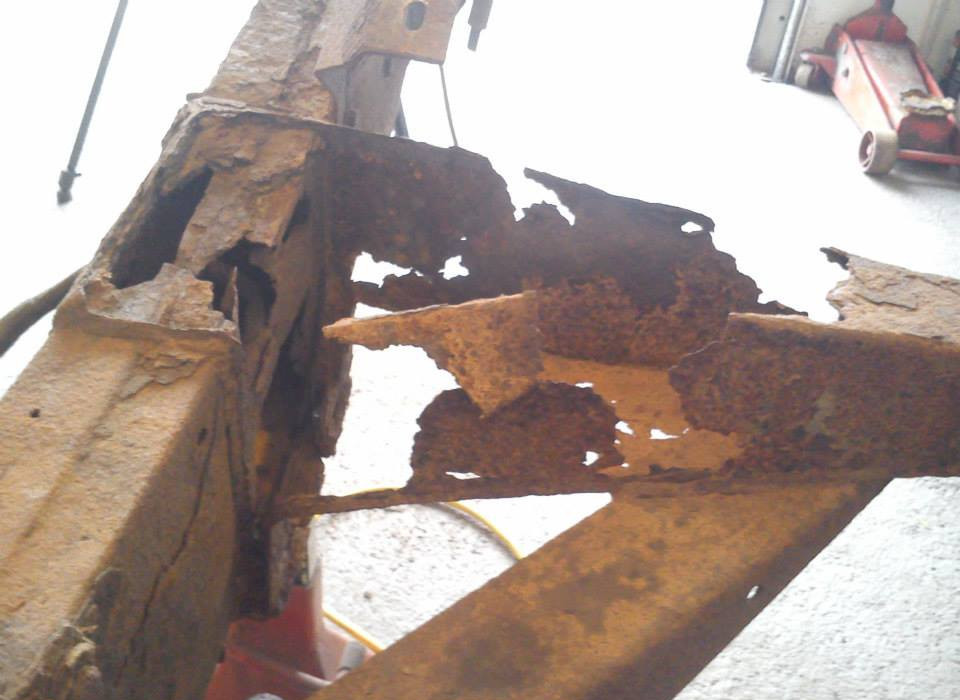 would be most kind, you can do so by PayPal using this link: paypal.me/dangerneering. All donations gratefully received, thank you.

If you’d like to get involved in the discussion, just drop a comment below, I’d love to hear from you!